Inspiration Interview: The Love of Running is Back with Brendan 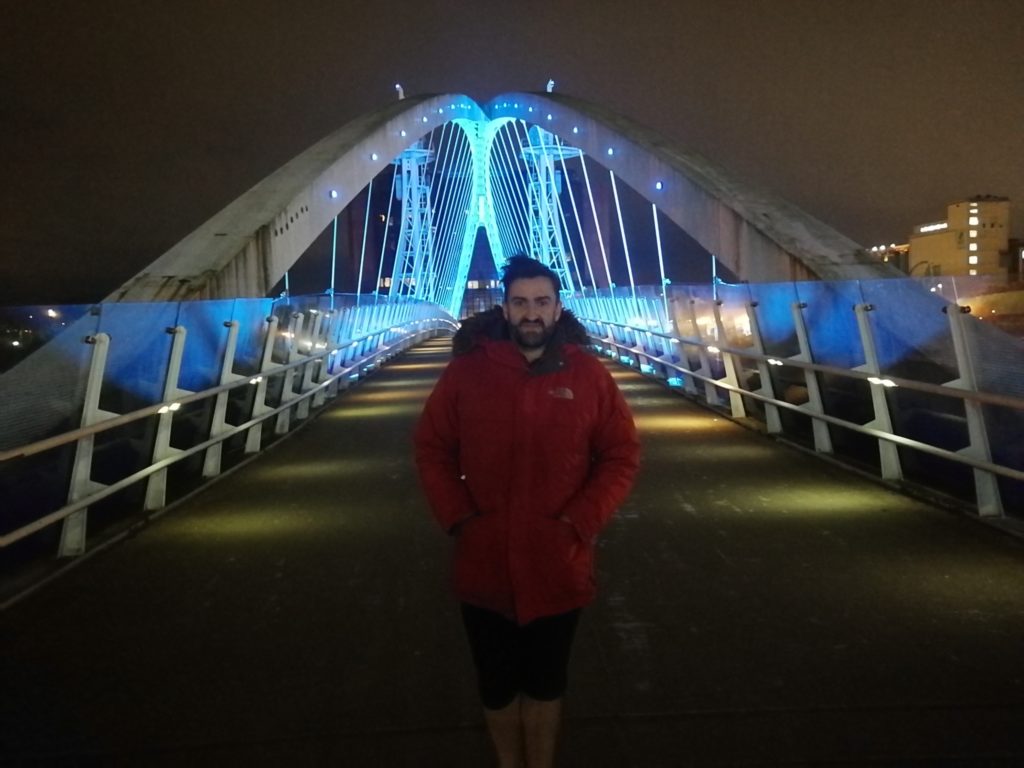 Brendan Rendall, pictured by me back in January, near his home in Salford Quays, cocooned in his coat and at that time, not running

With so many endurance events in jeopardy, just running for the joy of being out and exercising is back on trend. This interview from 8th March is with one of the most positive thinkers in the world of running, about how he has rediscovered that simple joy and used it to look ahead, past the current crisis.

Time moves so quickly. When I met up with legendary fundraising runner Brendan Rendall back in January, ahead of this March interview,, he was out of shape, running only occasionally, and Corona was a still just a beer. Everything has changed since.

I had a beer when I spent the evening with Brendan and he was on the cordials. It was on the January evening between recce days, a chance to practice the route in advance of Easter’s GB Ultra’s Manchester to Liverpool race. I had 25 miles to run the next day, Brendan had cited a wintering that had left him too out of shape for the recce.

Manchester to Liverpool (M2L) has been on both Brendan’s and my race day calendar on Good Friday. Back in January M2L was an unlikely maybe for Brendan, a definite for me.  Now it is postponed to 2021. But  it is Brendan’s rapid emergence that has impressed. He has been training way better than me! Completing this particular 50 mile Ultra will be a landmark moment for the astonishing distance runner, as the interview below reveals.

But first, if you don’t recognise the name Brendan Rendall, then we need to back track right now. Brendan is a running legend, a hero of mine, the man who moved from overweight wayward youth and wasted young adult to trans-Africa athlete and anti-poverty fundraiser with remarkable determination, equanimity and ultimate success. Brendan is already a man with a legacy of lives changed and bettered – when he might more easily have submerged into self-loathing cul-de-sac of drink and drugs.

Instead he is a man who educates others, changes lives, instills joy and positivity. He is ready to call up he next big challenge, a proposed record-breaking run from Cairo to Cape Town in 2021.

I followed up my January evening with Brendan more recently with the interview below on 8th March. Some of Brendan’s back story came out in the interview, but that story is very well told.  We were mostly looking ahead at who he is now and how he is once again metamorphosing from a special educational needs teacher in Salford to a finely tuned athlete with ambitions to run and run and run.

For Brendan’s backstory, this Laurence Jones Podcast interview is a great place to start

Brendan’s collected media appearances are on his website here.

I took up Brendan’s story with him from the time he completed Running Africa. How hard was it to adapt to a routine working life?

“After Running Africa I was extremely lucky to go back in to full time work at Ladywood School a special educational needs school near Bolton. I think having such a daily focus certainly helped me have structure and keep busy while earning money again after spending quite a bit on the run. The problem with returning to work I struggled to fit running around my working hours and I suppose I was going through that low period after a big challenge where you feel what’s next. My running certainly declined.”

Brendan has taken on some extreme challenges. He puts on – and loses – weight relatively easily and understandably he has seen weight gain and fitness loss on return from some of those challenges. He is keen to point out that at peak he is a speedy runner who runs sub 40 for a 10K in training and has a 37.31 PB at that distance, with a half marathon PB of 1 hr 22. Later this year at the postponed Manchester marathon he is hoping to push close to 3hrs at that distance. This from a runner whose mates laughed at the very prospect of him running a half marathon at all back when his running began. Massive distances are his trademark though and the statistics are worthy of a reminder. He has run:

For someone used to completing these extreme adventures, Brendan has just one DNF to his name, the aforementioned Manchester to Liverpool 50 mile ultra last year.

“My DNF at Manchester to Liverpool was my 1st event/challenge that I didn’t complete. I had 13 miles left… it was clear that I just didn’t want it enough. There are certainly lessons to be learnt from that DNF. My performance was frustrating, but I wasn’t worried about future challenges or my next Africa run because I know what I can pull off.”

“I have realised now that I should have just focused on enjoying running after Running Africa, not jump straight into races.”

Since I had that drink with Brendan back in January he has undergone a physical and mental transformation as he begins to focus ahead on his next big adventure. The weight has fallen away and I have seen him online delighting in 5am runs, and regular weigh ins. He readily shares the joy of each small achievement along the way. It is an incremental approach to the art of being happy and you can see how he might easily use the same approach to break his mega-runs down into a series of smaller regular challenges and celebrations. This desire to share his progress wasn’t always the case. Now that Brendan is such titan of running it seems odd to reflect that he was once awkward about running – like so many are when they move from the couch to 5K.

“When I started running in 2006, I had never run before and running in the dark felt more comfortable. I was conscious of my weight and running style. It seems silly now!”, he smiles. 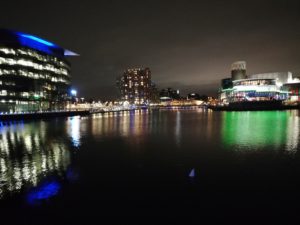 Salford Quays, the Media City. This inspiring city backdrop, a world away from Running Africa has been celebrated by Brendan in his early morning running routine

And this winter he has started afresh. Once you have been immeasurably fit and capable of such endless activity, it must require quite some willpower to re-engage and start back from a low base, but it is clear that Brendan has done that now.

“After the DNF my passion for running kind of went and I spent most of last year not running. At the end of the year I sat down and wrote down all the things that I did when I started running and when I was running faster.  Running before work really worked well for me.  It makes it easier that I am a morning person.”

“At the start of the year I set my alarm for 5am to restart running – I had no pressure of speed and distance I just wanted to run to how I felt – and it works. I love running when no one is around and watching the city come to life.”

“The structure and discipline then goes through the day my eating habits have improved and I have now lost over 2 stone. The weight loss has helped my performance and speed and the drive and passion for running is fully ignited.”

“I know the best is yet to come, I feel energised, relaxed and enjoying the journey of getting back to my best.”

Brendan went back to entering races again and had two marathons lined up – Bolton and Manchester – and a trio of 50 milers with GB Ultras – M2L, Pennine Barrier and Glasgow to Edinburgh.  Of these 50s, Brendan will be hoping to peak for Glasgow to Edinburgh in October, though of course the reschedule for Manchester Marathon may cause a conflict.

Brendan and I both share an affection for GB Ultras as a race organiser and so I asked him why he admires the team: “GB Ultras really is a special race series – I think it is extremely friendly and feels like a big running family. The organisers really go above and beyond for every runner – whether you are first or last every runner is made to feel special.”

So, what are the next steps ahead on the road to Africa, Cairo to Cape Town?

“Cairo to Cape Town is something that I have wanted to do for a while, I really feel I can pull it off.  Running across Africa from Namibia to Mozambique really shows my body adapted well to the conditions and I know if I go into to Cairo in the shape I was back in 2006-2012 then I could pull off something very special.”

“The run itself is going to cost a lot of money and I need to find sponsors to help fund this challenge. I have an organised tour company that can supply a support vehicle and 2 people with specialist knowledge about the route. They will carry the tents and all the equipment and be extremely useful going through the borders.

“I aim to start in 2021 its just down to money now and finding a sponsor to help fund it.”

It will be a lucky sponsor who gets on board, and not just because once started on his journey, Brendan has the strength and willpower that makes completion feel very likely, but because Brendan has a warm and considerate personality and a compelling storytelling prowess. His many media clips from his last adventure show exactly how and why he inspires people. Even as I write an adventurer is halfway across Africa inspired to follow in Brendan’s footstep. Everyone who listens to Brendan comes away wondering what they might achieve.