Take Away Day: The Roocopter Challenge

Some invitations have a certain stand out. Could I stomach an egg mayo bagel whilst whirlybirding around the Shard in a stunt helicopter? Okay. Thank you for thinking of me Deliveroo. Put me on that rota.

Without so much as Roger Moore eyebrow raise, I accepted this mission. My last invitation to London had been to eat a burger on a barge. Now, it seemed, the whole eating + transport thing was truly taking off. I put on a pristine shirt and set off for London, hoping to come through a cyclone of torque and return like a mayo splurried Jackson Pollock. 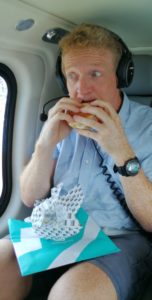 As it turns out, eating an egg mayo bagel at 1000ft with the theme from Eastenders unwittingly playing in your head, is easier than it sounds, courtesy of disappointingly considerate flying from Captain Keegan Campbell. A couple of tight turns above the Thames were a bit of a test, and yet the bagel was practically despatched, and the paper bag it came in was not going to be needed again.  Campbell’s craft was controlled with extreme competence and B Bagel Bakery Bar’s eggy special was unctuous and delicious. All exciting choppers should have had a bit of previous action, and mine was no different.  It had seen a tour of filmic duty when Mission Impossible came to public attention. But for this short flight it was all about the post event takeouts after Captain Campbell had lowered us gently back to terra firma.

Here’s mine. Seeing glorious London from above on a clear day, and being fed and expertly flown all at once was very much Mission Possible and I fully embrace Deliveroo’s ambitions to take dining sky high in London, Sydney, Hong Kong and Edinburgh.