Inspiration Interview: Winning by a neck 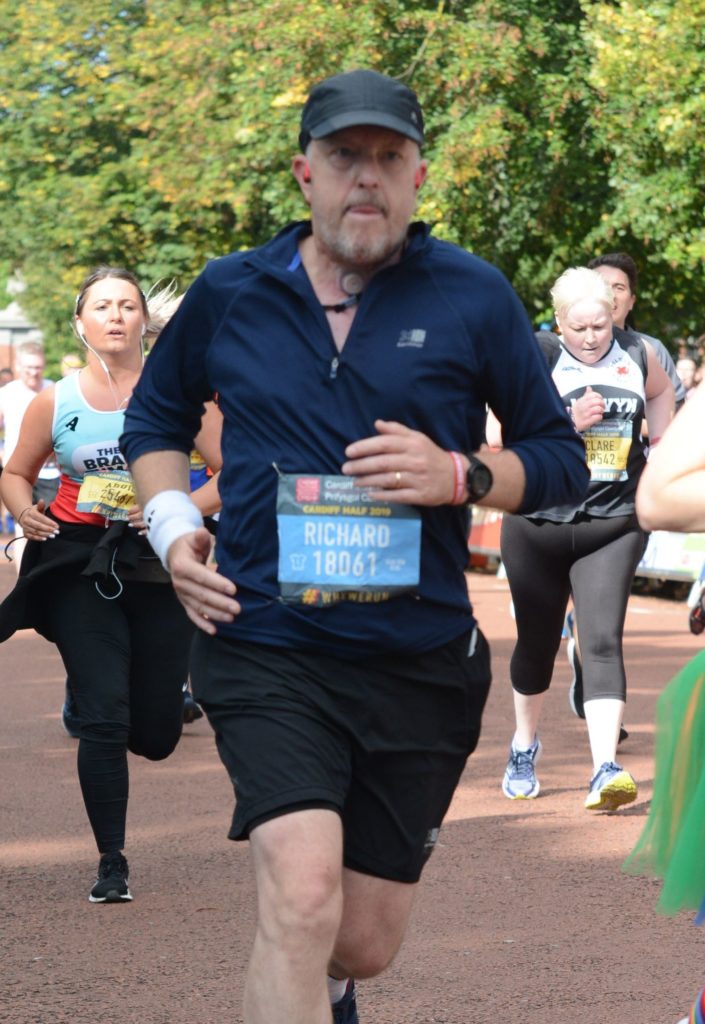 The astonishing story of Richard Andrews, the neck breathing ultrarunner.

An affectionate humiliation in the world of running comes to many of us when a costumed runner, typically a rhino – comes past you on the finishing straight.

An affect that the rhino runners have is to make you aware of their difference, their handicap. I have come to see this blatant signal of difference as a reminder of a deeper truism.

Every runner on the start line is different and running their race for their own reason, overcoming physical and mental hurdles. Some runners line up with simple differences in technique, nutrition, kit, training, and preparation. Some harbour colds, depression, sore muscles, heal spurs, work stress. An increasing number come to running post illness, post operation. Very, very few though toe the start line breathing through the neck.

But that’s what Richard Andrews does, and not only that, he has done so at a 33-mile Ultramarathon, The Pilgrim’s Challenge.

Richard’s astonishing achievement of running his first Ultra came about just 6 months or so after a laryngectomy, a radical operation designed to finally see off the cancer that invaded his vocal cords.

He told me, “I was diagnosed in July 2018 with Stage 2 Laryngeal Cancer (Cancer of vocal cords) – I had 30 sessions of radiotherapy between October & November 2018. Unfortunately, the following May it was found to have returned – the only option left was a neck dissection (removal of Lymph nodes) and total laryngectomy (removal of voice box).”

If that sounds invasive and debilitating, then it surely was: “It involved the cutting through the muscles and nerves in my neck to remove the lymph nodes – bodies drainage system – and also my voice box. As a result, my windpipe was separated from my oesophagus and my nose in an operation lasting six hours.”

Happily, that operation has been successful. When I asked Richard what the result was following this op, I was expecting a bit of news about the cancer, but his answer was rather more colourful. “I no longer have a sense of small, as my nose is disconnected and purely for holding my glasses. My mouth is purely for eating and I only breathe through the hole in my neck.”

The next time I find myself worrying about running with a blocked nose I’ll think of Richard. Since the main op, Richard has had a hole made between his windpipe and oesophagus. The hole is fitted with a speech valve, so by controlling his breathing, he can speak. A voice is a very useful accessory for alleviating the risks of running in case Richard picks up an injury.

Just the mention of a valve though has me checking the Internet. When life is dependent on a neck hole, there are challenges. Some patients find showers and heavy rain hard to adapt to and use a cover. Some find a build-up of lung mucus because the humidifying capacity of nose is absent… An operation like this clearly comes with mental challenges too and Richard admits not every day is plain sailing. “I have good days and bad days.  The hardest part is the daily cleaning routine which takes about an hour in morning and an hour before going to bed. I have slowly become used to it but was hard.  Also learning to swallow again was an effort – and due to modified pipes and radiotherapy I can’t taste. I am now vegetarian, as I struggle to swallow and chew meats.”

Finding other runners who have undergone the same operation is certainly a researcher’s challenge, whether because of the relative rarity of the condition and operation or because of the level of determination it takes to neck breathe and run is hard to know. I have tracked down a couple of runners who have tackled half marathons as neck breathers, one of whom ran with his consultant as something of local news celebrity. It strikes me that Richard may be in unique territory by going from laryngectomy to ultramarathon.

Not only that but the best example I found via research was a man returning to running post-op. Remarkably Richard wasn’t really sporty at all before cancer. He hadn’t run since school and joked that “getting in and out of car was my exercise.” He was inspired to run when completing radiotherapy and tacking Hereford 10K.  He was, at least, a bit fit – “I had ridden a bike and enjoyed cycling.”

Richard now has a 100-mile cycling event on the agenda.

I wondered, as you very well might wonder, what Richard’s doctor makes of his bionic creation and what advice these medics have for him. But the answer seems to be that no one truly knows what Richard might be capable of. “They hadn’t heard about anyone doing it as quickly, or to the same extent.”, he explains. The Pilgrim’s Challenge did stir up some consternation at hospital HQ: “When I told my specialist nurses and doctor, they were a little concerned as they knew of nobody that had done it.”

It’s not all bad though, Richard is one of the most hygienic runners to line up alongside. “I can’t spit or snot rocket!” he jokes, “and though I have had had to modify my breathing technique as I cannot hold breath. One good thing is I cannot get out of breath.”

With the Pilgrim’s Challenge defeated in just over 8 hours, Richard is setting about a 15 event series through 2020 including one stand out event, Race to the Stones, the summer ultrarunning classic along 100km of The Ridgeway. It can be completed in one go or with an overnight stop. Richard has taken up the 2 day back to back 50K option, presumably getting the pipe cleaner out overnight.

He is clearly enjoying the prospect and his nearest and dearest have been helping him to achieve these goals. “Family and friends have been brilliant, and the support network has helped drive me forward, One particular friend JC has done the Pilgrims with me and is doing the Race to the Stones as well.”

Richard must be at least a little unhinged to be contemplating this. “Yes, everyone thinks I’m mad – but its good fun and gives me energy”

Feeling energised is an unusual truism of ultrarunning. It is amazing how energised you can feel in the process of, or following, exhausting yourself completely.

Of course, for Richard ‘Why I ran an Ultra’ has another answer too, one of defiance. Crossing the line at the end of the Pilgrim’s, emotion caught up with him. It was a moving experience.  “I just felt I had stuck two fingers up to cancer and proved if you want to do something – do it.